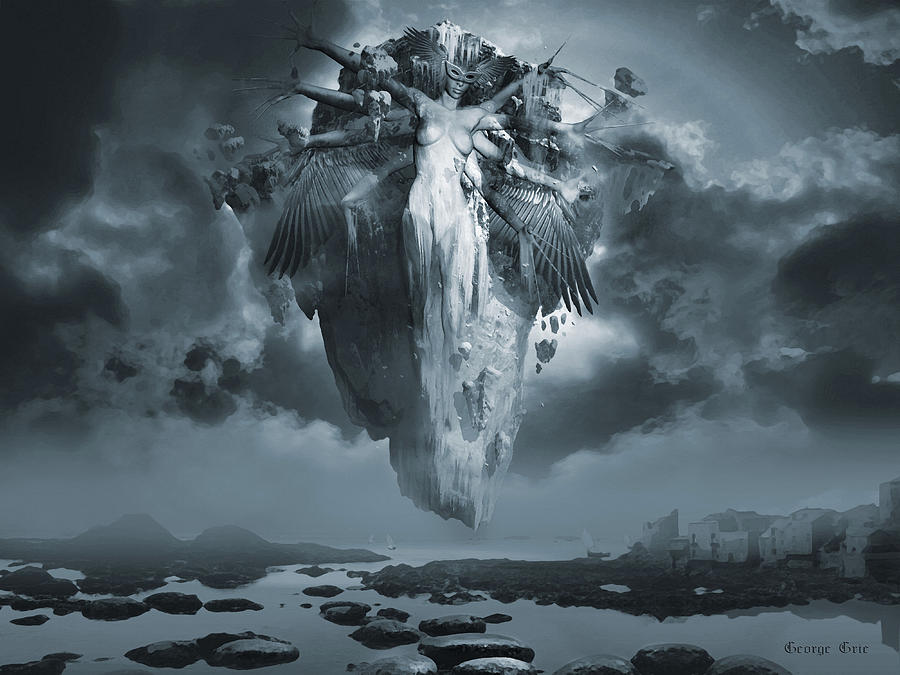 New age rendering of Kali’s image produces an awe-inspiring effect of an all-embracing destructive cold: the goddess’s cold stare accompanied by the cold gray skies is further substantiated by Kali’s cathartic appearance from a floating iceberg. The apocalypse of a small coastal town is inevitable. Yet, it feels almost liberating: this place has apparently been asking to be razed to the ground for a very long time. This reveals exactly the ultimate purpose of Kali the Goddess – demolishing the past in order to procreate.

The root “Kala” means “time” in Sanskrit, in which case the goddess Kali represents a very important Hindu belief in the transience of the flesh and eternity of the spirit. Being one of the most ferocious world deities, Kali is one of the manifestations of the wife of Shiva and mother goddess Devi. Her intentions are often misinterpreted as pure rampaging thirst. In fact, her swords are the destroyers of false consciousness and bonds that tie us, and she only annihilates to recreate with her nurturing power of the female energy.

Traditionally, Kali is represented as a Black woman with four arms. Black, symbolizing the total absence of color, underlines the nature of Kali as the ultimate reality. In one hand, she carries a sword. In another, the head of the demon she has slain; with the other two, she is encouraging her worshippers. She is three-eyed, as in past, present, and future – the three modes of time, an attribute that lies in the very name of Kali.