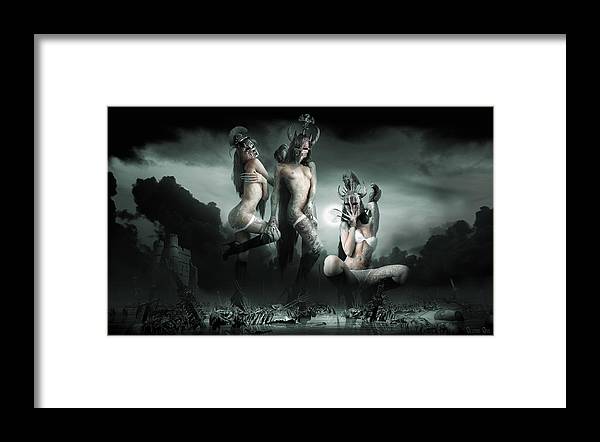 Moonlight Bathing Valkyries framed print by George Grie.   Bring your print to life with hundreds of different frame and mat combinations. Our framed prints are assembled, packaged, and shipped by our expert framing staff and delivered "ready to hang" with pre-attached hanging wire, mounting hooks, and nails.

The title of this image can be very much misleading, indeed, and I think that I owe my viewers an explanation. It doesn’t only use the traditional... more

Nice! Congratulations on the sale.

The title of this image can be very much misleading, indeed, and I think that I owe my viewers an explanation. It doesn’t only use the traditional characters of the original Scandinavian mythology but also makes the most of the modern sub-cultures’ references, Goth's in particular. Goth ideology puts its emphasis primarily on visual aesthetics and unaffected ethics aimed to underline their feeling of detachment from the mainstream life and culture. It is shaded in dark colours, death and the supernatural with a tendency towards distinctive intellectualism and outward cynicism. Goth movement doesn’t have any religious basis; however, religious, spiritual and supernatural imagery plays an important role in gothic fashion, music and visual art.